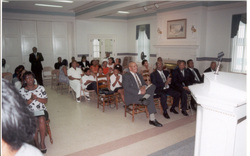 In April of 1970, Corinthian Baptist Church began with a small mission of eight members. Among those eight was our own Sis Jones and her husband. At that time, and without an actual church building, meetings were held in various homes for prayer and bible study.  A larger meeting place became necessary very soon after.  The YWCA graciously opened their doors and the work of the Lord continued through Sunday Morning Worship. After moving to the YWCA a pulpit committee was organized to choose a pastor and select a name for the church.  It was agreed upon by the committee and congregation that the church would be officially named Corinthian Missionary Baptist Church.

In August of 1970, Rev. Arthur E. Mills Jr. was officially named the pastor of the church.  In December of 1970, Corinthian was officially established as a church by the late Rev. L. J. Jordan along with 25 members under the name Corinthian Missionary Baptist Church.  The church began to grow and in the spring of 1972, two acres of land was donated by Mrs. Mollie Roby at the corner of Linden Ave and Willow St.  The building was purchased and the building was soon built and in September 17, 1972 the church came together to worship within the walls of the newly built edifice.  In 1974, the wayside bulletin board was installed along with the shrubbery and the trees.

We serve a powerful and matchless God. He has blessed us with the same wise and confident overseer, Pastor Mills, for the past 42 years. We remember the past, live graciously in the present, and thank God what He will to do in the future.

In December of 2015, Reverend Marshaundus Robinson, having served as the interim Pastor since June of 2015, was installed as the Pastor of the Corinthian Missionary Baptist Church.  The church continued to mature during the tenure of Reverend Robinson.  There was growth and pain during this transitional period.

On April 27, 2019, the pulpit of the Corinthian Missionary Baptist Church became open and the Deacon Board assumed the care of the church. Reverend Troy Starks assumed the preaching and teaching roll in the church as the search for a new pastor began.


The Angel Choir was established in 1974

The Consecrated Choir was established in 1977

The Mother's Board was established in 1980

Groundbreaking for new edition was in 1993